Debauchery is a German band, known for their deranged idea of mixing death metal with hard rock n’ roll!!!! Continuing their boogie-groovy death (?) metal kill, they present their 5nd attempt to bother your ears. I must say the sound is really strong & clean, & their songwriting has become more brutal than before with the addition of many blastbeat parts, but…. God damn you can’t play AC/DC riffs with brutal vocals above or fast-thrashy riffing ending up to rock n’ roll leads….. shit, despite the fact that this is complete rock n’ roll heresy, this is simply not death metal!!!!!! Death metal should be violent, fast, dark and brutal as fuck!!!!!! Debauchery seems to have a different point of view, they seem to believe that Six Feet Under’s “Back In Black” (the shittiest thing a death metal band has ever released) is a great experiment, but that’s what might they think….. only for Six Feet Under fans or people who would prefer a strip-tease with a death metal soundtrack :-) !!!! 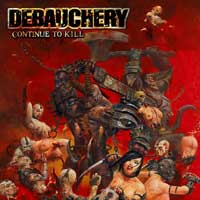