Formed in 2005, Decaying Purity come from Istanbul, Turkey and “Phases of Dimensional Torture” is their debut, spine-breaking & corpse-molesting album!

In 2006 they release their “rehearsal promo 2006” and in 2-year time they sign to Grotesque Productions and release this concrete savage shit….

We’re talking about pure brutal death metal here; full-speed blast beats, rotten vocals, hellish razor-riffing and macabre atmosphere in general! Suffocation, Brodequin, Deeds of Flesh and Morbid Angel are obvious influences for these Turks - some times you really think you’re listening to an album of one above, but it’s their 1st album god damn it….. It’s a fact; Decaying Purity gives us a great piece of brutality out of nowhere! I’m sure, having absorbed their influences; their next release will kick some serious ass even more! Those guys are drowning in death-stench!  Very Fucking Brutal…… 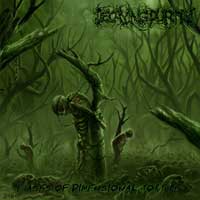