Nice stuff from these Belgian guys, who started playing in 2004. After 4 years of rehearsing, live shows and many line-up changes, Demon Squad is now complete and they deliver us their 1st self-financed MCD called “the Scourge”.

Now this MCD is a pure Thrash Metal Assault right into your fucking face!!!!!! Their songs are catchy, full of hellish thrash riffs and fast drumming, giving the impression that these tracks are made straight for the moshpit! I liked their vocals very much, because instead of following the typical “screamy” patterns, they sound more brutal & demonic. Those vocals and some really heavy, mid-tempo breakdowns, make Demon Squad sound a bit more death metal, fact that makes you even fonder of their music!

Should the sound had been stronger, we’d be talking for a major ass-raping release! But that’s OK the guys got balls & play loud, so check’em out and BLEED!!!!!! 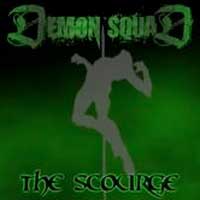 1. Entangled In Demon Flesh
2. Declaration Of War
3. The Unknown
4. I Heretic
5. Reign Of The Demon
6. New Definition Of Pain