Diabolic - Chaos In Hell/Possessed By Death

Diabolic come from Tampa, Florida and are quite known in the death metal scene throughout these years. Despite their origin (Tampa = death metal), Diabolic plays a mixture of oldschool (what the fuck is N.W.O.A.M??!!) death and thrash metal with many black metal injections, sounding very obscure and evil - pretty fucking cool if you ask meJ! “Chaos in Hell” and "Possessed By Death" were released as Eps in 2006 and 2007. Here in 2008 it is released on one single CD and the songs follow the same path of unholiness, only this time they sound more traditional death metal than any other time. They mostly reminded me of early Morbid Angel (“Altars of madness”), Deicide (“Deicide”), even Cannibal Corpse (“Eaten back to life”/”Tomb of the mutilated”)!!! A really nice piece of brutality, 24 minutes full of satanic lyrics and voices, evil tremolos, fast drumming and malicious riffing! Even the sound reminds you of the early 90’s death metal feeling! Nice shit to check out! 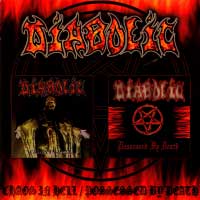 1. Engulf The Enchantress
2. Jaws Of Death
3. Chaos In Hell
4. The Suffering Church
5. Dissonance
6. Devour The Subconscious
7. Possessed By Death
8. Evulsions Of The Soul
9. Chronology