Diary About My Nightmares - Forbidden Anger

Diary About My Nightmares (also known as D.A.M.N.) are a death metal band from Germany with "Forbidden Anger" being their second album. D.A.M.N. perform some pretty fast stuff with a few annoyances, but also a few surprises. The band lyrically incorporate both their native language and English to make things interesting. The guitars are lightning quick with a lot of thrash elements amongst all the blastbeats and the drums tend to hammer just as fast. There's plenty of melody in this to make it feel like a raw Amon Amarth album, but there's just enough to give D.A.M.N. an edge to make them more than just another cookie cuttered death metal band.

Yes the vocals can sound really throaty and raw, borderlining black metal or just poorly done metalcore, but at times they are growled to fit the ideal style of death metal. Ultimately what makes "Forbidden Anger" a death metal album is the raw speed. However, not everything on this album is about trying to go as fast as possible. Tracks like "Urt La Bu Tal" are melodic, mid paced instrumental chuggers that resemble Amon Amarth- death viking metal for those who don't know them while others such as "Hate" have a slow, almost doom metal pace to them like one would hear from Paradise Lost. There's even some quiet, acoustic moments with progressive electric solos such as on the track "First Class Suicide." Very different from the rest of the band's style and a welcome reprieve. This even shows up again on the last few moments of the final track, but not before a few wasted minutes of silence.

As for the rest of the music, D.A.M.N. performs pretty meteokre death metal. The guitars have lots of melody, but they outshine the drums a lot. Then the vocals usually outshine both so it becomes a sick game of "rock paper scissors" on the listener to see what effect wears on them the fastest. Expect a lot of unison with the guitar style and maybe only one moment where the bass can be heard clearly. The solos aside from the one on "Ewigkeit" aren't that inspiring because they tend to be buried with the other guitar which tends to keep up along the same melody lines. Normally they should stand out and be heard loud and clear.

"Forbidden Anger" is a good listen for anyone who prefers melodic death or black metal, but beware that the songs may burn out on the ear hole faster than anticipated. There is some light in the darkness regarding the progressive moments that D.A.M.N. has more variation to their style than one could have anticipated, and will hopefully continue in a direction to keep varying and crafting their sound to their own melodic death style. 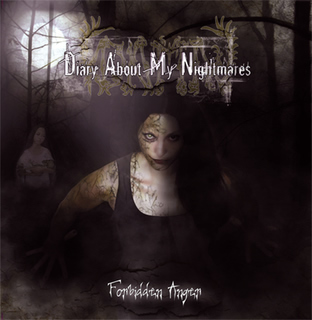