What we have here is the debut full-length album of a band from Long Beach, California called Disciples Of Death. As you have already guessed from the band's name, this is not some kind of surf rock but pure and crushing old school death metal.

Disciples Of Death exists since 2014 and when you hear their music you will realize how good those guys are on their instruments. "Progressive Entrapment" offers nine songs of pure death metal with galloping tempo, heavy guitar riffs and the deep growls of the vocalist Edwin. The opening track 'Region Of The Damned' will make your neck hurt from headbanging but the same can be said about the following audio slayings such as 'Disciples Of Death', 'Mouth Of Terror', 'Morbid Curiosity' with its black metal vibe and the smashing 'Putrid Eternity'. Kam Lee's Massacre is the band that comes to my mind while I'm listening to "Progressive Entrapment" but Disciples Of Death are even more dark and brutal. This is pure death metal without any technical wankery of thousand notes per minute.

Disciples Of Death wants to crush your skull and make your brain explode through your ears and they fully succeed in that. Those guys deserve a contract with big label because their music is first class. If you consider yourself a death metal fan then make sure to listen to this album and support one of the better bands in the sea of metal mediocrity! 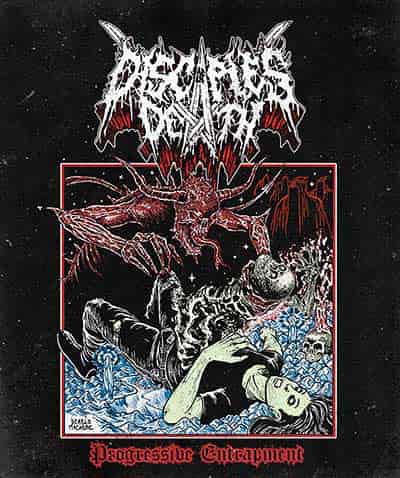