Ex-Voivod front man Eric Forrest has gathered together a group of excellent musicians and collaborated with some of the better exponents in extreme metal to produce an album of hard rocking, riff driven tracks laden with enough guitar breaks and old school aggressive thrash to guarantee the adrenalin gets pumping.

Deviation is a kick ass opening with some seriously growly vocals and leaves you in no doubt what is to follow. Unlike a lot of extreme metal, most of the songs are easily accessible and for the most part there is very little filler, perhaps only Agent 99 being a bit of a mish-mash that never really decides where it wants to go. Revolution Riot Act grabs you by the balls and demands that you bang your head, Malpractice and Wired also being worthy of any mosh fueled hangover. Closing track Victory is a revitalized Voivod demo, fittingly recorded in tribute to the late Piggy(RIP).

With Modified Poison, E-Force have managed to make an album that is intense enough to satisfy the legions of black and death metal while still retaining the interest of an audience more used to the likes of Megadeath and Machinehead - no mean feat that. Recommended! 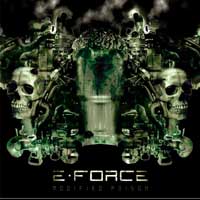