Some things never change and this can be the case in Doom Metal as well. When i reviewed Ea's last album, i mentioned how underground and obscure the band is and now one album on into their career in depressive Funeral Doom, nothing has change. Still no website except a Myspace fan page and still zero information on the band. The new album called "Au Ellai", like previous releases has minimalist artwork, no mention of the band members and even the CD itself is pure black. At least they managed to put the song titles on there, better than nothing i guess. You have admire their dedication on remaining in obscurity, "Au Ellai" follows on from the previous "Ea II" album, no big surprises there, but they may be getting even more depressing and darker as time goes on. This Russian band are obsessed with delivering some of the darkest Funeral Doom ever produced and they do that on "Au Ellai".

All three tracks basically follow the same bleak formula with the only difference being the track times. Crushing, down tuned guitar sound, hypnotic ambient parts, acoustic sections and melodic but depressing solos. You also get the trademark blackened growling vocals and the heavy, atmospheric keyboards that adds even more bleakness to the depressive mood. Someone just pointed out to me that mood spells doom backwards, just thought i would mention that. The first track on the album, "Aullu Eina" clocks in at over 23 minutes and is a punishing example of how Funeral Doom should be done. Over this extended journey into darkness, the track never stops building in intensity. Building layer upon layer of monolithic, textured sounds that has a lot to do with the keyboard sound which is raw and beautiful at the same time. Unlike many other Funeral Doom bands, there is never a attempt at a catchy, mid-tempo section, nor do they try and add color but throwing in cheesy, female vocals. This is pure raw Funeral Doom and nothing else.

"Taela Mu" is the second dose of darkness on the CD, similar in vibe to the opening epic and just might be even more bleak, stark and unforgiven in its personal tormented message. Like previous efforts from Ea, the band use a lot of droning techniques. At times the band concentrate on making a wall of sound with the guitar rather than actual riffs. This adds volumes to the overall sad feeling the songs have and one thing is for sure, this isn't a band to listen to if you are already feeling miserable. The third and final track is the most ambient of the three, its titled "Nia Saeli a Taitalae" and pushes the levels of despair for nearly 20 minutes. Starting off like sounding like some kind of ritual, there is humming in the background as the track takes you on a excursion to a very twisted and lonely place. Its a brilliant composition but the lack of variation may be too much for the average Doom Metal listener. They are still for fans of Shape of Despair, Monolithe, Worship, Thergothon and Mournful Congregation but if you of a weak or feeble mind, stay clear of Ea. They are for the hardcore Funeral Doom fan and if you are that way inclined, you will want this. 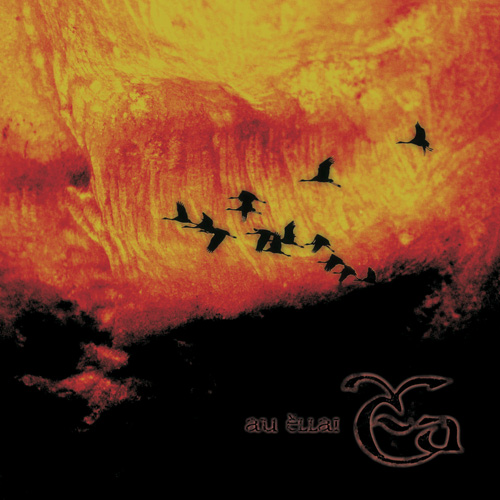