This Czech band Eardelete is a reformation of musicians from the break-up of a band called Negligent Collateral Collapse. Four of the five members of the older band are in the newer one and have just released their first full length CD called Zombielogy. These guys are very heavy. Awesome! I once read, I think it was Jean Baudrillard who said it, that contemporary culture would become obsessed with the Undead. It is true. Zombies and Vampires have entered the mainstream. There are even undead characters of recent fiction on the romance genre. I am not saying that Eardelete is a mainstream band. Far from it. They are way too brutal and attack prone to be accepted by the populace Metallica or Iron Maiden fan. These guys are doing something else. The opening track, “Zombie Powers” is excellent because the music is heavy and straight forward from the first second but the real destruction potential is with the vocalist, Paul. He lets loose with a developed guttural style that seeks nothing less than the eradication of humanity’s stupidity.

I say this because the second track is called “DAD,” while the second and third tracks are called “Craving for Human Flesh” and “DOD” respectively. “Why is this important?” one might ask. I think it’s important because all who have understanding of the English language’s colloquialisms know that DOD means Dead On Delivery. This means that even though the character of the tunes realized in the singer is in fact already a Zombie and wants to eat humans, he is already Dead and his parents, or at least his DAD, is also a victim of this rotting humanity that is dying already and is about to be eaten. The implications are quite disgusting. Yet that is the point. The band is a weapon of sound and they are on Obscene Productions for a reason. It is not an accident. I do not think that Eardelete tune their guitars down any steps as Suffocation does but they have their moments where Suffocation seems to be filtered, particularly in the CD’s sixth track, “Dissect Morgue Corpse Suppurate” In this track, the band stretches out for a deliberate act of death grind explosion and it stretches well. I do not know from the band’s Myspace page, a page with very limited information, if they plan on keeping together, but they should. There is a future for this band I think, especially incarnated in the CD’s second to last track, “Ulcer Ulceration Ulcerative Colitis.” Tear it down and throw it in the fire! 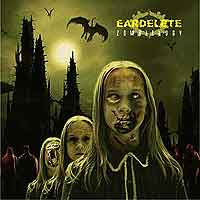