Earth Crisis - To The Death

To start off: "To The Death" is their "new debute" album for this New York harcore outfit who has been back together since 2007. Earth Crisis originally came together in 1991 and created some musical havoc until their break up in 2001. Earth Crisis is known for their strong support of animal rights and for being straight edge vegan in lifestyle.

As with past albums "To The Death" lycial themes use strong statements with concerns to politcs and animal abuse.

"To The Death" is angry sounding, loud and to the point. Vocals are fierce, fun and jumpy tempo and the riffs are pumping with full energy. There is definate passion backed up with extreme power in getting this album's theme and message accross. These tracks are killer but are meant for a live audience for this metalcore is perfect for stirring up a pit of chaos other than sitting around on the sofa relaxing to haha. Total aggression with truth, thought and meaning behind it this album gets my vote of 4/5. 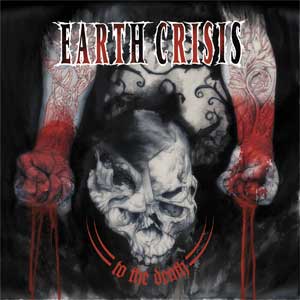