Eastfrisian Terror hail from Emden (Germany) and sing in their native language which is a dialect called Eastfrisian Plattdeutsch only spoken in a very small corner of Germany near the Netherlands. Their debut is a self released three song EP titled "Lever Dood As Slav" which translates into English as “rather dead than slaves”. I may not understand what they are singing about but I like their attitude and rather dead than slaves makes a nice motto for sure.

The three tracks on this release are average in length and have a very grindcore meets slow chugging death metal meets black metal sound. The music is groovy, grimy, brutal slamming death with lots of time changes and plenty of guitar squeals and snare drums behind vocals that range from pig squeals to low guttural Cannibal Corpse style vocals to classic black metal sounding vocals as well. Definitely different and obscure sounding while maintaining a familiar feel to it at the same time. 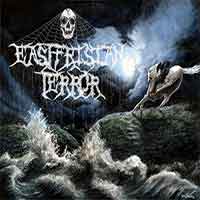 Self released
Band: http://www.facebook.com/eastfrisianterror
Reviewer: Tim Reed
May 6, 2013
Next review: Chaos Synopsis – The Art Of Killing