This just-south-of-Sidney, Australia band Ebolie has released a demo, two EPs, a full-length, and are in the process of working on a split CD with Maximum Perversion right now. The band does work and their EP Let Loose speaks to this work in the sounds. The mix is wound together without emphasis given to any one article on the EP more than another one, except the vocals. The guitars play very straight grindcore/death metal, the bass rocks, the drums accompany in that time-tested death metal way, but Ebolie is a vocal band, a power group that backs up an angry vocal spewer (they refer to their growth as an actual bacteria spreading).

The vocalist growls with the all-out quality of Pig Destroyer and yet will control himself with the reserve of Anthem of Prayer for Cleansing a second later. There are even a few seconds here and there when the vocalist will song like a little girl and then (because Let Loose is a live EP) he will talk to the audience in his “normal” voice. This is something that some metal bands will do and some will not. Harrison Christie of PsyOpus will talk normally between tracks (I have seen them live), but Ihsahn of Emperor and Shagrath of Dimmu Borgir will not. Part of this endless performance voice (and it is pure performance) is just part and parcel to the Metal scene I think, but part of this reflects that question of the separation between where the “truth” of the singer and the “truth” of the person who sings lies (I think there is a difference). Ebolie dances on this line gracefully (like with the grace of a truck with ballet lessons) in the EP Let Loose. 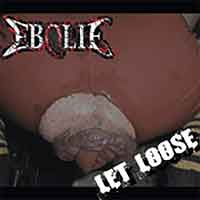