Hailing from Greece Ectoplasma certainly doesn’t mess around having only just released their full length debut they already following it up with an EP. Ectoplasma play old school death metal and make you feel like you are back in 1991 for all the right reasons. All you have to do is look at the killer artwork. Here you get four new songs and a pretty cool Demigod cover.

The band slams into a minute long opening track and don’t take a breath before kicking into the title track. A nice mid paced number which brings to mind early Morta Skuld with a blistering solo. 'Slain Meat For The Beast' opens with a sample from one of my favorite 80’s horror movies “Night Breed” so I was instantly won over. This track is faster and settles into a nice groove before slaying again. 'Awakened In The Coffin' is a slow doom ridden track. It has a dirty feel to it like old school Swedish death metal. We are then treated to a nice cover of Demigod’s 'Toward The Shrouded Infinity' which obviously can’t touch the original but they pull it off.

All together this is just under 20 minutes. It’s a nice little release that gives you a short, sharp fix of old school death metal. Well worth picking up and a band worth keeping your eye on. 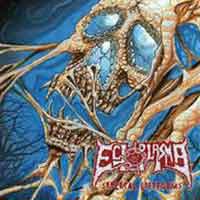