Ectoplasma is an uprising underground death metal band from Greece. Keeping the old school vibe of pulsating and primitive death metal of the 90's, they successfully bring it to present. Their music is a pile of mud, rotteness, filth and disgust thrown straight into your face. Although they hate polished productions, their sound is so massive that ends up bone-breaking.

A year after releasing their "Cryogenically Revived" EP (2018), "White-Eyed Trance" is their next step on their way up to the Golgotha of sinistrous, decrepit, grim death metal. Their 3rd full length album is a massive step of real heaviness and darkness put to music. Possessing in my collection already some of their releases, and having seen them live as a support act to the Incantation Athenian show in 2018, I knew what to expect here. The whole album is a tribute and a glorification to the frenzy of the early death metal days.

John Grim spits forth his words/spells reminding me cornerstone bands like Purtenance, Demigod, Rottrevore and Incantation. His vocals sound angry and massive at the same time, but still warm with a nice bass overtone. It is worth mentioning that John Grim's love for pure metal is reflected in his label as well. Spawn Of Flesh Recs is John Grim's own label, focused mostly on cassette tape releases and re-releases of old school death metal diamonds like Sorcery, Dissect, Wombbath, Necrophiliac, Funebre to name a few.

Back to the album, Maelstrom on drums is a guarantee behind the drum kit. With experience gained from playing in bands like Caedes Cruenta, Dephosphorus, Embrace of Thorns, Principality of Hell, Saboter and Thou Art Lord to name just a few, he is extremely steady and precise and offers the band great drumming ideas. In their live show he didn't miss a single note!

There is no actual need here to get to each track seperately in "White-Eyed Trance" since the album should better be treated as a whole in its excellency. This is how we learned to listen to music, by listening a whole album, and this is how it should be done, guys. However, only to give you some more hints about Ectoplasma's new release, I will mention some parts that hit my inner chords more.

'White-Eyed Trance: Choronzonic Covenant' opening riff is anthemic. Classic mid tempo death metal riffing with the second guitar performing a genious James Murphy influenced lead. The overtones are simply amazingly thick and Ectoplasma underline their unique sense of melody in this song. The sudden rhythmic changes shall not leave your neck free to breathe. The countless melodies are epic! I love the bass soloing over open guitar chords. Then everything will return to thrash/death frenzy. The lead guitar at the end of the song reminded me of Horrified (Gre)! Pure awesomeness!

'The Oak Spewed Foul Whispers' is a song of pure darkness. The thrash/death riff in the middle of the song makes the connection with the band's present and their thrash roots. The lead guitar of 'Ghostly Emanations In The Mortuary' and 'White-Eyed Trance: Ensnared In Devilry' may be subtle, but it adds a distinct feel to these excellent and passionately performed Ectoplasma songs.

'Alucarda, The Daughter Of Darkness' theme took me back to 1977 and 'Alucarda, La Hija De Las Tinieblas' or in English 'Alucarda, The Daughter Of Darkness'. This Mexican horror film directed by Juan Lopez Moctezuma and starring Tina Romero Alcazar is the story of 2 orphan girls living in a convent and unleashing a demonic force that possesses them! 'Skeletal Lifeforms' is a new version of an old Ectoplasma song. The original lies in the same titled EP from 2016. The band constantly improves and here they present their 2019 version of the song. Bang your head!

The album ends with an excellent cover to Devastation (TX) 'Souls Of Sacrifice' from their 1991 "Idolatry" album! Ectoplasma's version is less thrash compared to the original. They embedded this classic song from this seriously underrated band in their own style showing respect for the original. This respect is what is greatly missed today and has to get back directly to Ectoplasma for their honesty.

To sum up, if you like the early 90's death metal and bands like Demigod, Autopsy, Demilich, Incantation, Massacre, Morpheus Descends, Autopsy, Death, Possessed, Morgoth, Pestilence, Dismember, Asphyx and Death Courier this one is for you. Ectoplasma perform some of the more intense and groovy old school death metal you will come across today. If you still haven't, please do yourself a favor and discover Ectoplasma and their a creepy excellence in performing relentless death metal the old school way! You won't regret your time and money.

CD version comes out on Memento Mori and Repulsive Echo will release it on vinyl. Full support! 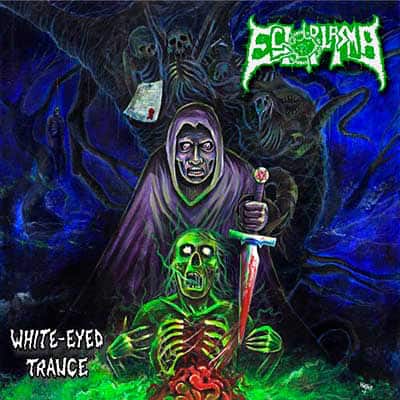