Einfall- The Art To Enslave

Einfall are a black metal band from Russia who released this debut album back in 2009. It's groovy and raw black metal that is more in the vein of Satyricon with that whole 'black n' roll' feel to it while focusing on a rhythm that is captivating... but only after the first few tracks. Einfall seem to be kind of stuck on a one way path with this album and its sound. The main focus is on the guitars and their buzzing riffs that are performed at a leisurely pace and don't just go by with such speed that one feels like they have to keep their brain running on overdrive to comprehend the music, like most black metal tends to do. No, this is a nice, churning ride that invokes the catchiness of thrash but minus all the technicalities. There are not solos to distract or anything... just riffs, drums, and vocals, with melodies in between.

Perhaps that is part of the issue then. For a track like "Enslavement," it is great. By "Fight For The Inner Life," it is pretty boring. Unless one is a fan of groovy black metal, they'll probably quit listening to this album by track five. The vocals also don't help much. They are a comprehensible snarl, but tend to stay in the same tone all the way through, and by doing that they just feel uninspired and bored, which reflects the tone of the rest of the music. The only thing that really seems to change the vibe of the music is the "Intro," which is a symphonic piece that would have done better as an interlude to break up the album into halves so it could be enjoyed a lot more. Instead, everything just feels somewhat looped, even if it is different riffs per song. The entire pace of the album is the same and doesn't do much to engage listeners the same way some grindcore or death metal albums just hammer out drumming and distorted vocals in an endless spew. 'Einfall' is groovy and catchy, yes, but nothing catches the attention forever... the band needs a bit more variety in their work to branch out to more fans rather than just that single 'sub genre' grouping of black metal. 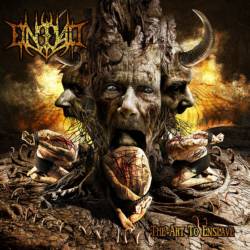