Eisregen create melodic dark metal that is a hybrid of melodic doom metal and black metal. Combining their unique German heritage with beautiful melodies, they've created a successful line of albums throughout the years every since their start in 1995. Lyrically, their work is much more gruesome and more along the lines of a Cannibal Corpse album with a touch of Satanism. But, one would never really know it because the music doesn't represent that. It's a mix of metal and classical that seems to really make the band more dynamic as opposed to standard dark metal.

Their latest offering, Schlangensonne, really emphasizes the pinnacle of their music. Lush keyboards and piano passages are mixed up with the chugging aggression of the guitars. The opening track is a pure hellfest that involves some woman being tortured as she's screaming and then the low, dark growls of the vocallist, who sounds a bit like if Rammstein decided to go black metal. The vocals are still very engaging overall; they range from snarls, clean operatic vocals, and grim screams. Combined with the catchy rhythms of the chugging guitars and bits of piano, one has themselves set up for an interesting ride. The album as a whole is neither too soft, or heavy. The entire pace is smooth and mid paced without making the album feel too rushed and hectic or too crawling and boring. Some tracks llike "Kai aus der Kiste" are more keyboard driven and feature the clean vocals leading the music. This isn't really typical Eisregen, but adds a whole new layer for the band that is energetic and still creepily gothic at the same time. On the other hand, tracks such as "Ernte den Untergang" sound like they came straight from a dark metal/ black metal album and offer unbridled aggression with the blast beat drums and rapid guitar strums.

One thing that Eisregen has going for them on this new album is the black rock n' roll influence. Many tracks such as "Linkshänder" feature an extremely catchy rhythm in the way of riffs that just make it irresistable. Fortunately, these riffs aren't the entire structure of the song; sometimes there's a melodic piano/ keyboard section or a rapid solo, but for the most part expect some catchy stuff. The gothic elements and ambiance are still included through the keyboards and are always present on the tracks, sometimes more profound than not, but always there. The title track is an excellent demonstration of this with it's slow, churning melodies on the guitar and the backing synth. It is truly gothic doom influenced.

On one hand, Schlangensonne, may seem a bit more mainstream and commercialized as far as sound goes, especially due to rich production. But, on the other hand it is still unique and a great addition to the CD collection for those who have been following the band. For those who are new to this group, they will enjoy it in the vein of Cradle of Filth, Old Man's Child, and Virgin Black. The fact that the music is so harmonic and the lyrics so disharmonic makes the irony hilarious; normally one wouldn't realize it unless they understood the German lyrics. Language proficient or not, the music is engaging and will enlighten those who really choose to listen for the inspiring dark metal that has a clean sound but still knows how to stay unique. 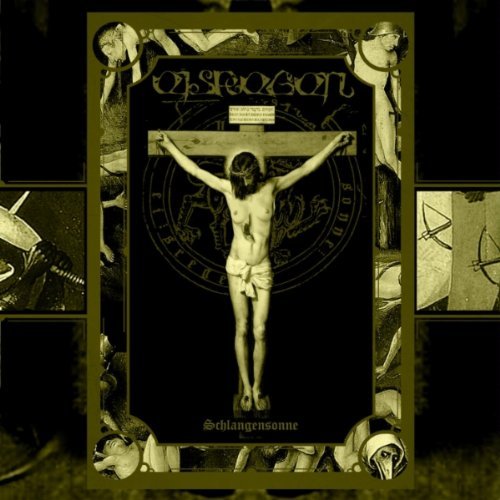