Ekklesiast - When The Dead Boughs Awake From The Dreams

Christian down-tempo metal from Russia. Ekklesiast's lyrics are all based on their christian farth from what I can tell. At first it all sounded good to me seeing that I don't speak or fully understand Russian (which is the language all these tracks lyrics are in) but when I was able to translate some of the tracks on "The Dead Boughs Awake From The Dreams" and had found some info to read up a bit more on this three piece I was a little put a back to know that they are pretty much hardcore christians haha. Putting my demeaning views aside I decided to be totally neutral as to my personal views towards anything christian and give this band and this album a fair review.

"When The Dead Boughs Awake From the Dreams" is definatly a straight forward album that is both rough and clean in sound. The vocals are nicely presented and all is pretty much well mixed, I did find though that in some places the sound production to be poor especeally with the drums. If you can translate the lyrics though (keeping the already stated fact that they are christian faith based out), you will find that the themes and phraises themselves are somewhat unoriginal and to judge the album on a whole it is nothing in style that hasn't already been done this way before however, Ekklesiast do find a way in keeping your attention and are not boring in their repeat of presenting their music on this album. If you are not a hardcore christian hater and can respect the music and are just a fan of misery depressive music then you will deffinately appreciate "When The Dead Boughs Awake From The Dreams". Hey Ekklesiast have been around for a while and have a solid fan base so they must be doing something right. I give this album a 3.5/5. 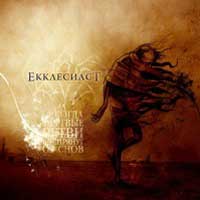