Estuary - The Craft Of Contradiction

In 2002 the band Estuary was formed in Cincinnati (USA) and soon recorded a three track demo. In 2003 the band was signed to Ibex Moon Records and the debut "To Exist & Endure" was released and now in 2007 their follow up is released. If you listen to the music and see the band pics the most outstanding element is that the vocalist is a female. Incredible how she can grunt, even when I smoke 60 sigarettes a day and drink 3 bottle of Jack Daniels I am not that capable. But aside that the band plays melodic death metal with thrash elements. The guitars are flipping over and over and pouring out so many different riffs that it also can become too much and glad they do leads. Tempo is most of the time mid paced with breaks into fast parts. "The Craft Of Contradiction" is a good technical album with countless riffs and nice thrashy melodic death metal beats. 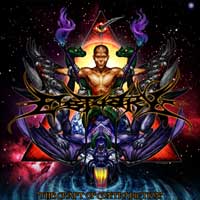 1. Enduring The Illusion
2. Creation Damnation
3. Lies Of Promise
4. Trans-Dimensional Scourage
5. A Disease Called Dogma
6. Heirs To The Throne Of Fear
7. Cleansed Of All Wisdom
8. Belief Addictions
9. Frailty In Numbers
10. Cardinal Points To Die Upon