Founded around 1999 and consisting of (amongst others) former Edge Of Sanity and Incapacity members, Facebreaker is already a well known name within the worldwide Death Metal scene. “Infected” is the current addition to the back catalogue and if you´re already familiar with the bands previous stuff, you can imagine what to expect. Don´t know who kicked off the actual old school Death Metal movement, but Facebreaker are worthy ambassadors. “Infected” sounds a lot like Bolt Thrower meets the Swedish scene during the early 90´s. And with a production, so enormous and crystal clear, the Facebreaker guys will easily become a part of the Death Metal champions league. Well, do you think the future looks bright for this band? I totally agree, but to be honest, the before mentioned sound quality is a little bit too polished and over the top. Unfortunately the bigger part of the riffs are lacking of a recognition value. Some may consider it way too simple or too uninspired, but that´s not the point. Facebreaker isn´t just another wannabe clone band - this have already been proven on their previous releases (“Bloodred Hell“ and “Dead, Rotten And Hungry“ rule supreme!). It´s more like a solid offering without huge surprises. Yes, there are narrow confines when it comes to old school Death Metal and there´s not much space for a novelty or progressive enrichments, but in my opinion a good album needs some more freshness. Nevertheless “Infected” is recommendable, because of it´s compositional closeness to well-established acts like the already mentioned Bolt Thrower. If you think “Infected” will come up to your expectations, don´t hesitate to visit your local record store and buy this one. In my humble opinion, this release is credible and solid, but unfortunately not the expected kick in the pants. If it would be possible, I would have rated it with 3,5 points. 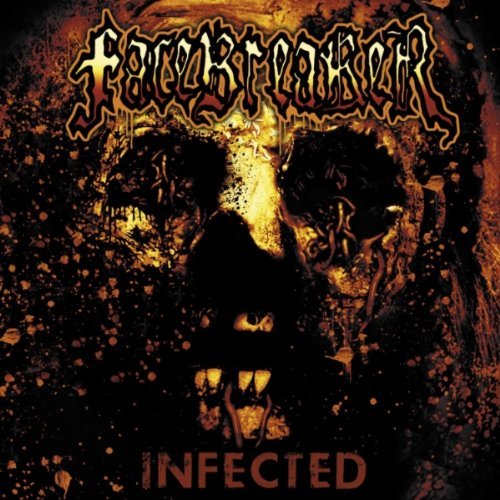