M.D.K: Second band on the split is M.D.K, brutal sick brazillian death\grind band. This was actually the first material that I heard from M.D.K, I wasn't really expecting much just because the name sucks, haha. Though I was horribly mistaken when the music came on, the first thing that I noticed was that they reminded me of Necroterio, with the dry guttural duo-vocals that grunted to perfect and mixed through the music very well. Also, the guitars have sick sound, extremely downtuned. The drum work is pretty damn impressive, this is another band that actually knows how to work the blast beat kind of like Putrefy. This album has all the perfect elements you need for a gory death\grind band, great musicanship, everything is on key and brutal as hell. Production isn't the best, but when you're into death\grind are you asking for the best possible production you can get? No, because producti on means shit to death\gore\grind. I mean, instruments are heard clearly, it's just a brazillian production I suppose. All and all this is very good shit, if you like Necroterio check this shit out, you'll definitely dig it.

Methadone Abortion Clinic: Some of the sickest goregrind today is put out by these nasty fucks that are mastermind of Methadone Abortion Clinic Spree, I actually have heard various other things that MACS has recorded so I knew what to expect. The vocals are duo-extremly harmonized vocals, at times you get a Regurgitate feeling from the vocals, then you get some nice guttural as hell vox that are of course harmonized. The music, as for this goes it is completely goregrind, it has the standard goregrind tune. There are some pretty bone riviting slam riffs coming from Methadone Abortion Clinic, reminds me of music from home, which is none other than TXDM. Also, I hear something on their side of the split that seems to be reminiscent of Wormed the musicial jazzy feeling with sadistic whispering vocals, ah sick shit. The drums are of course are created from a drum machine that also sounds a b it monotonous, but like I said before what drum machine doesn't sound monotonous? There are some pretty sick porn samples in this album, if you don't watch out when listening to them album you'll find yourself becoming aroused and giving your boxers a creampie, it happens! I speak from personal experience of course. Needless to say, MACS does their part with making this album a sick fucking masterpiece

Obese: Obese is extreme disgusting goregrind from to sick fuckers out of Wilksbarre, PA(usa). One of those sick fuckers is the founder of Fart Out The Cum productions, your gateway to brutal music. Anyway Obese is hatefilled goregrind with an unusual obsession for fat women, I think this is because of Jims overwhelming number of wideload bitches, possibly? Just a hunch. The harmonized vocals are dominated by Chickmaster and they sound pretty sick, I wouldn't know who to compare them to. The other vocals you hear, gurgles, grunts and all non-harmonized vocals are dominated by Jim. All instruments are done by Chickmaster, he does a nice job with the guitar work, "We are the roll patroll" has to be his best effort, it's catchy as hell, but in other songs you kind of get a huge tempo change in everything, which is not a bad thing, it's still pulled off well by these sick fucks. T his is actually the first drum machine that I can stand to be quite honest, it doesn't get monotonous and if you didn't pay attention you would have no idea that this is actually a drum machine. Need I tell you there is a cover of Pugent Stench's "viva la murete" Sick fucking shit. Buy this fucking album, get in touch with Jim at FOTCP in the contacts section it is sold here.

Uterus: For those of you who do not know who Uterus is, let me first say that you are a moron. It is Eric from the Deathgrind webzine (www.deathgrind.com) and "j.w" . This actually is one of my favorite bands in the goregrind scene, because Eric as a reviewing himself knows exactly what people want with death\grind or gore\grind and he lays this shit down just right. He does drum programming and guitars. If you take a listen to the guitars, there are some worthy slams  with lots of tempo changes, one minute you get mid-paced slammy death\grind shit, then the next you're getting a total blast of gore\grinding speed. Ultra fucking sick shit, and as for the drum programming on behalf of Eric, thanks for not making this shit suck and keeping it sounds a bit real. I'm actually quite tired of bands wi th monotonous drum machines and dull sounds. So again thank you for preventing this album for having a possible chance of suckage. The vocals are pretty damn sick, of course you should know the Uterus styled vocals, harmonized, and very disturbing gut wrenching shit. At times, when I hear the vocals I think of the guttural vocals that Intestinal Disgorge has. So all and all this side of the split is great. So do yourselves a favor all your goregrind fans reading this, buy this god damn CD don't be a closet case any longer! 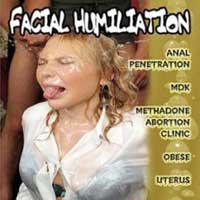