Fall Of Eden - Dawn Of A New Age

"Dawn Of A New Age" is the debut full length from Fall Of Eden, who actual fell from the Second City. Chicago Illinois. Very enjoyable release for these young upstarts. Influences such as Iron Maiden, Amon Amarath, and Mastadon can be heard through out this release. Harmonizing guitars, rhythmic, hard hitting drumming that keeps the songs going, a harsh, abusive vocal style, and to top it off...A group of musicians who paid more attention to writing catchy, exceptionally structured songs rather than grinding at a million miles an hour. Everyone keep an eye and ear out for Fall Of Eden. We will hear from them again on the next platue of there carrier. 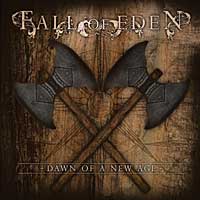