'I/O' is the third effort from Spanish based band Father Golem, who still continue to push their boundaries in the Heavy Metal/ Progressive Metal department. For those first hearing Father Golem they may feel there is a bit of a dichotomy going on here. Unlike most Prog Metal bands who have a tendency to keep everything a constant mix of chaos that is highly technical and still enjoyable, Father Golem tend to keep a dichotomy going that is crystal clear yet still ever evolving. One on side there is the sharp, heavy Hard Rock oriented riffs that tend to drown everything else out, even the vocals, and sound akin to the Nu-Metal openings that were popular back in the early 2000, and then there is the softer, more technical moments that are  more complex and melodic and don't sound as angry. And Father Golem always keeps the music changing throughout each track just like their albums, which makes them unpredictable to follow and therefore all the more intriguing. Take the opening track for example. "Perfect Chaos" opens with a soft bit of guitar the builds up louder and louder and even adds in some tribal percussion that will bring reminders of Sepultura, and then everything explodes into just harsh, sharp chugs that feel like the opening to mid era Godsmack before mellowing out to a style that is both harsh and yet beautiful similar to that of a band like Iron Maiden, though not as Power Metal focused. Father Golem continues this trend on the other tracks as well, though not as aggressively or uniquely as the opening track on a song like "Sole Survivor," which feels a bit more on the generic side as far as trying to be a bit of 'hit single Heavy Metal' track, but it is still well orchestrated and paves the way for the second half of the album which is even better than the first half.

Father Golem really show their progressive side on the track "Infrared." Taking a Believer approach, they throw in some electronic vocoder moments that really add a sci-fi touch to the music but refrain from overdoing it too much so it feels like an industrial remix knock off. The vocoder moments are sparse, but right from the start they suck listeners in because it makes such a unique stand compared to the more operatic, clean vocals that dominate most of the other tracks. There is even some saxaphone involved for some jazz influence. The two part "Evercycling Journey" presents a strong dichotomy of both soft and hard music. "Trapped Among..." is almost a ballad with clean guitar sounds, more percussion, and even some cello and violin for a more classical feel, which is the ultimate opposite to the second part "Impact" which is heavier, crunching and more along the lines of a track like "Sole Survivor." Father Golem still try to keep up with their unpredictable nature though by switching back and forth between clean interludes and the heavier verse/ chorus moments while keeping an upbeat melody that is different from the angry, steeldriving rhythms that dominated the early tracks. It is a great way to close the album and also rounds out an interesting concept that doesn't feel like it goes on forever yet feels epic enough that it stirs something more than the average 3-5 minute length track would. 'I/O' is definitely a brutal and melodic listen, able to draw in attraction from both those who are fans of the angry side of Metal to the more mellow side as well, and perhaps showcases Father Golem's best work so far in their career. 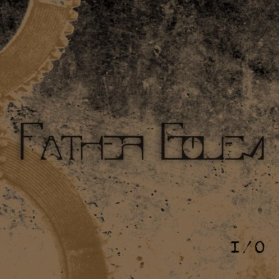