Having actually owning a physical copy of Flayed Disciple's EP 'Drawn Viscera', and witnessing their destructive brutality live in my hometown of Taunton, it comes as no surprise that this album is going to be none less punnishing than the EP. Production has shot up, as well as their fanbase. Scoring themselves a record deal, Flayed Disciple are on the up, up, up!

The album opener 'Bring Down The Hammer' is a perfect intro, which consists of a thrash metal apocalypse - with riffs almost faster than the speed of light. This being only a brief introduction of the menacing inferno that is the rest of the album. 'The Westboro Massacre' is the next track, where the vocals pummel the listener. Although there isn't a great difference in vocals compared to the EP - a clear distinctive purpose of production value is highly noticeable, and checking back to older tracks such as 'Dead Disfigured Babies' this is easily proved.

The guitar solos on the record are the most annihilating element, which destroy their previous efforts on the EP in terms of talent, and again production. 'Pig', the album finishing track boasts with eight minutes of destructive riffs, which easily decimate over the vocals proving the guitar work to be the most fancy thing on the entire record.

The albums art concept resides as something different in the genre, as the band are not following the trend of creating a gory, blood-thirsty, disgusting as fuck cover. This makes the record more enjoyable, knowing that the band can be taken seriously, without the insanely overdose of gore provoked art that most death metal bands settle with.

On a whole, the album hits harder than a smack to the face. Everything needed to force 'Death Hammer' as an acceptable death metal album is here. Flayed Disciple should prepare themselves for taking not only the UK by storm, but the rest of the world from now on, because their game is as matched as some of the more successfull bands on the scene, who should watch their backs if they don't want Flayed Disciple to steal the show. 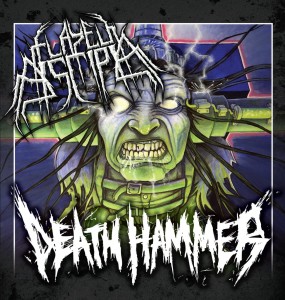