'Step Into Damnation' is the debut full length album from Netherland based Death Metal squad Funeral Whore. Taking an old school approach to the churning, chugging formula, listeners will find hints of older Bolt Thrower, Immolation, and even Incantation mixed within. Tracks like "Wasteland Of Corpses" and "Failure Of The Sacrifice" have a fast, pulsing rhythm to them that is rather mid paced and features chugging riffs that are similar to the more modern Death n' Roll bands out there like Six Feet Under, but the fuzzy, obscure sound makes things much darker and harsher. During the interludes there is plenty more melody to enjoy so it doesn't just feel like hammering drums and roaring repetition all the time. Like many old-school bands the fuzzy distorted sound and rather repetitive music structure can be a bit weary on the ears, but at the same time it is much more primal and can stir as much of a fire up in the soul as a highly technical riff can.

Some of the tracks seem more humorous in a distasteful way despite how well they sound. "The Bitch Died" feels more like it would fit on a Mortician album or a Death n' Roll group that had a more 'gore n' misogyny' approach, but most of Funeral Whore- despite their name- seems more focused on the 'death n' gore' approach on a darker level, and a track like "The Bitch Died" just feels somewhat out of place. The horror and screaming samples add atmosphere but also seem to cut into the music a bit. Still, the sound of the music has that raw, chugging marching deathsquad tone to it that will rile up Death Metal fans a-plenty in the mosh pit. Together these groups of tracks are solid, tasteful, and will definitely appeal to those who prefer the early 90s Death Metal sound that was less studio refined and not as mechanical with no electronic elements or frills. This is just something that is pure oblierating and decently voracious. 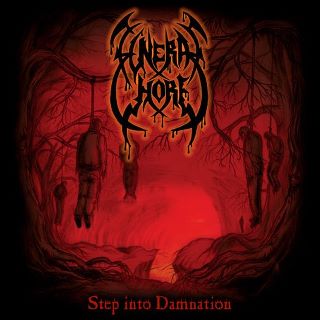