GAF is a finnish band that begins in 2007 playing grindcore/goregrind with influences of bands like Regurgitate, as you can listen in their album debut called "Mongofied" (2008), but their sound turned more into grindcore/death metal with touches of goregrind in their second album called "Cultivate Disdain" (2010).

Five years after of this release, GAF presents their new release, the EP "Gore 'n' Feast" via Splatter Zombie Records and their sound take another way because they still plays grindcore but the songs are more influenced by other genres like punk rock with heavy riffs an aggressive vocals, which is more clear than their old vocal style (there's only a couple of times that you can hear growls in this release), and they shows some instrumental touches that remains me some parts of Entombed's "Wolverine Blues" & "To Ride, Shoot Straight And Speak The Truth" era and Blood Duster in addition of the song called 'Ace Of Speed' which is a wink to Motörhead with a dirty bass and guitar interpretation.

Maybe for the fans of the first years of the band this work are bored or soft, but if you are a listener with an open mind you can enjoy it for sure. 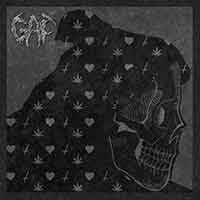