Irish thrashers Gama Bomb don't really need much of an introduction, so I'll skip today's history lesson - if you're reading this, chances are you're well aware of their distinctive brand of extreely fast, silly thrash metal. Basically, what we have here is a completely free to download teaser of their upcoming album "The Terror Tapes", featuring the lead single 'Terrorscope' (obviously) and three non-album tracks exclusive to this release. Which is rather nice of them, really. It also ensures that this will be a rather short review, which all (any?) of my regular readers will admit is an extremely rare occurance.

So the title track here is rather typical of Gama Bomb - very silly, very fast, very fun. However, despite being as frenzied as ever, there's a renewed sense of restraint to be found which makes them a hell of a lot more enjoyable. The singalong chorus is something that you find a lot in thrash, and with Gama Bomb's catalogue, but it's done kind of... well, in a different way than you'd expect the band to do it. I for one really enjoy it, and the promo video for the single left me in tears of laughter so if you get the opportunity, check it out. Following track '666% Insane' is another shorter, more to-the-point track reminiscent of a lot of material from their last album "Tales from the Grave in Space" and then you have the seven second 'Jaws 4' which, if nothing else, is thrown in for the hell of it. Hard to judge that one really, though it does seem a bit pointless. The most interesting one is the Spanish version of 'Terrorscope' tagged on the end of the single which, while coming across as a bit of a hastily-thrown-together placeholder at first glance, is strangely endearing. I remember Evile doing a version of 'Time No More' in Japanese a few years ago and Megadeth did a Spanish version of 'Trust' so it's not unheard of by any means, and it's... just kind of cool in a bizarre way. Production throughout is top notch, the songs are all energetic and the band's perfomance is tighter than Philly Byrne's bum so there're no compaints to be made in the sound department.

Since this is a free single, I can't help but recommend it. 'Jaws 4' is a bit unnecessary, but one can overlook it because let's face it, bands have made entire albums that consist of such 'songs'. If the material present here is any indication of what Gama Bomb will unleash with "The Terror Tapes" then said album will be well worth your cash, and this is most certainly worth downloading. Yeah, it's nothing strictly new, but who cares when it's this good? On a final note, the artwork for this single is utter genius - why no band has ever thought of having their album art as a cardback for an action figure of some sort is beyond me. Gama Bomb deserve your support just for that idea alone. 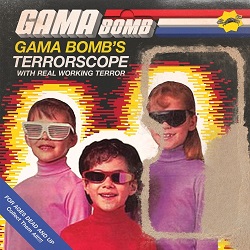