All four people who read my review for Gama Bomb's Terrorscope single last week will recall that I was rather impressed with the emphasis on the songwriting aspect of the track in question and highly recommended it, and made my excitement and anticipation for the new album The Terror Tapes quite apparent. Gama Bomb's previous releases had always seemed to fall into the thrash trap (note to self; Thrash Trap is now a band) of having all the heaviness, speed and fun that the genre requires but lacking a certain special something that would have made their material that bit catchier for everyone. It was kind of like having a banana split without the chocolate syrup - yeah, it's still absolutely delicious how it is, but there's that niggling feeling that the chocolate syrup would have elevated it from a delicious treat to a mindblowing cosmic orgasm that completely changes the way you experience banana splits for the rest of your life.

...Sorry, I seem to have trailed off. My point is that the Terrorscope single wasn't a mere fluke meant to deceive listeners as many singles tend to do these days. Bands and labels have all too often released a fantastic single and generated ridiculous hype and favour in doing so, but then fans buy the album only to discover that it was only released as the single because it's the only good track on the bloody album and thankfully, The Terror Tapes has avoided this. In fact, this album is everything I'd hoped it would be and that my dear readers, is becoming an increasingly rare occurrence these days.

Looking at what's present here it's easy to see why Terrorscope was chosen as the single as it just sounds like a single should, but the rest of the songs follow a very similar approach with their increased focus on melody, hooks and songwriting. For instance, the stomping chorus for The Wrong Stuff has Philly Byrne's vocal melodies kicking my teeth in as if I'd just pissed in their cereal and despite a majority of the tracks having the same general approach to this newfound sense of melody (vocally emphasised in the chorus for the most part) it never really gets dull because it's something that Gama Bomb have needed to do for a number of years. It's not so melodic that it starts wandering off into mid-ninties Metallica territory in a drunken haze after too much Guiness, but hearing Philly actually singing instead of just wailing his tits off like he's slammed his cock in the knife drawer actually makes a whole world of difference to Gama Bomb's sound and I'm sincerely hoping that he takes the Evile route - i.e. he amends some of the band's older material live with this new vocal prowess. Musically, though The Terror Tapes is certainly more coherent in it's structure it still comes across as textbook Gama Bomb through and through with some downright mad riffing and - above all else in my book - utterly mad song titles. In my review for 2009's Tales From The Grave In Space I expressed my delight at the song Escape From Scarecrow Mountain which even now I think is a fantastic title, but Gama Bomb have gone back to being silly as shit and the aforementioned song has now lost it's honour to the almighty Shitting Yourself To Live. I'm not kidding. Their sense of humour was toned down a lot for their previous release, so it's delightful to have tracks like Beverly Hills Robocop to give you a chuckle as you bang your head and the whole package has such a satisfying quality to it that is sure to please die-hards such as myself and Otis the Aardvark. Backwards Bible and Metal Idiot were two tracks that I particularly enjoyed as well as all those previously mentioned... in fact scratch that, every song has it's own charm and I'm pretty certain that if the phrase 'all killer and no filler' were to apply to anything then this'd be it since everything has obviously had such painstaking care and attention during the writing process that the songs themselves probably think that their composers are trying to get in their knickers.

Now there is one very minor gripe to made here, and that's the general length of the album's tracks. The average song on The Terror Tapes is around three and a half minutes, with a handful of shorter ones and the final track Wrecking Ball clocking in at four and a half - now I'm usually fine with all of this since I'm one of those picky metal fans who gets bored with tracks that breach the three minute mark without a good excuse in case I'm overdue for my evening blowjob, but in Gama Bomb's case it sometimes just feels a bit too long. Tales From The Grave In Space has an average song length of two and a half minutes with a bunch of shorter ones and two at three minutes which was absolutely spot on for this sort of music, the fun-silly-crossover-parody-thrash-sexiness style of music needs to be short and snappy to be effective and as a result, The Terror Tapes does tend to feel like it's been padded out unnecessarily in some places. I don't mind so much because of the points I made earlier of Philly's singing being so long overdue and it's a VERY trivial annoyance, so there's more to enjoy but maybe if a few tracks were just twenty or so seconds shorter then this would be as close to perfect as Gama Bomb's sound could ever get.

You'll notice that at the start of my review I said that this album was everything I'd hoped that it would be - note that I didn't say 'expected it to be' because if I'm honest, I didn't expect the entire album to match the single in it's quality at all because expectation almost always leads to disappointment... hell, ask every woman I've ever been with. But in reality, The Terror Tapes has actually surpassed any expectations I may have had and crushed them with one swing of it's colossal Irish testicles of doom. I do feel a bit harsh focusing on Philly's vocals throughout the review as the rest of the band have done their respective jobs better than ever and they deserve all the recognition for crafting such a great album, but I'm honestly under the impression that Mr. Byrne has made the biggest difference this time around. That said, Gama Bomb deserve all of the blowjobs and beer on the planet. All of them I say! The Terror Tapes is a fantastic thrash metal album, so good in fact that I'd actually say that it ties with Seregon's The Movement as the best album of 2013 so far. It doesn't reinvent the wheel by any means and some people (and those elitist shitheads who think that the whole music industry owes them a fucking favour) will be turned off by an album such as this one, but there's just no such thing as an album that will appeal to everybody on the planet yet this one will definitely appeal to the majority I'd say. The Terror Tapes isn't just worth your money, it's worth all of your money, your soul, your firstborn child and a giant golden pig embedded with diamonds that shits pizza and sprays Jack Daniels from it's eyelids.

And for you horror movie fans, a bit of trivia for you; the album artwork was painted by none other than Graham Humphreys, who did the posters for A Nightmare On Elm Street and the original Evil Dead. All the more reason to check out The Terror Tapes. 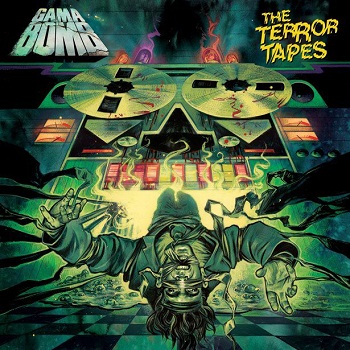 1. The Wrong Stuff
2. Legend Of Speed
3. Backwards Bible
4. Beverly Hills Robocop
5. Smoke The Blow With Willem Dafoe
6. We Started The Fire
7. Terrorscope
8. The Cannibals Are In The Streets - All Flesh Must Be Eaten
9. Shitting Yourself To Live
10. Matrioshka Brain
11. Metal Idiot
12. Wrecking Ball