The Finnish band, Garcharot, has released a death metal album called CORE OF DESPAIR and this album is actually worthy to sit beside albums by Decapitated on the shelf. That to me is the gold standard of metal comparisons. Can a CD hold its own next to Decapitated or be annihilated due to extreme inferiority? This band is still not equal to Decapitated, few bands are, but CORE OF DESPAIR is a riff heavy death album that rolls like Cannibal Corpse but with the turns of Decapitated’s NIHILTY. The lyrics are growled but in a way that makes them understandable more each time the CD is spun and while the guitar sounds its frets off one-by-low-pounding-one at the hands of Janne and Markus, the drums fly through rapid routines with an awesome style that fills in the spaces but without too much art. I do not mean the drum’s artlessness is a criticism, I mean this as a compliment because the drums are fulfilling something simple while the weight of the music’s fabric is borne by the string instruments.

I think of the CD’s title track and the track just after, ‘Distorted Reality,” as good examples of my point because the title track is full because even though the string instruments build such a powerful wall of low sounds, the drums are higher pitched and add tangible texture to the sound and full in the beats that the guitars can not hit by enveloping the tracks in swells. “Distorted reality” is similar to this but also adds seconds of rhythmic stutters to break up the power. If this is what Garcharot is doing on their first official full length, then the sounds in the future will surely overwhelm our ears. 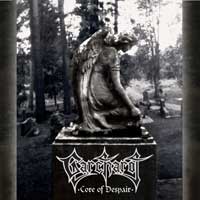