Genghis Tron - Board Up The House

Genghis Tron is a threesome and formed around four years ago. Their goal was to create something left-of-center which resulted in an EP, gigs and a debut full length called "Dead Mountain Mouth". In 2007 they switched to Relapse and one year later the birth of "Board Up The House" took place.
The three musicians (guitars, keys and programming) create a blend of everything. Musically it is diverse and range from aggressive to ambient moods. The drum programming has no problem with the blast beats and the keys are sounding like a pulsating beatbox topped with space effects. And the vocals are not only singing clean parts but he is also screaming his lungs to pieces.

What I like about their music is the interactivity between the demonic shoutings, blasts and the quiet relaxing beats. Genghis Tron delivers a weird album but a good one. 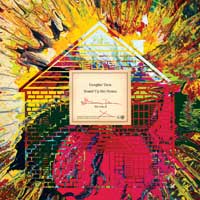