These Swedes are supposed to be a thrash/crossover band but their style is rooted in the raw side of punk and metal, kind of a blend of Motorhead, Venom and other raw metal innovators like some later Darkthrone material by feel rather than by total comparison. The term black thrash may even spring to mind, especially with the majority of tracks containing a standard drum pattern and timing akin to that sub-genre. The vocals are very much a mix of Lemmy and Cronos, especially in ‘Rages of War’.

Germ Bomb play very simple music, this maybe simple but they know how to grab a hook with the music, ‘Among Maniacs’ is a perfect example. It is very basic but the addition of a couple of notes gives the track an evil eerie stance, something that sounds so natural even with the almost apocalyptic closing track ‘Reverberation of Mankind’.

As simple as this is and as I have mentioned earlier, the songs are simply too long, there is only so long you can rely upon the same guitar arrangement or drum pattern before a certain level of complacency enters the fold. Having said this, I find this a mighty infectious release by their key use of oddball melody from the guitar that simply works with the vocal tone, so long as it does not outstay its welcome that is. 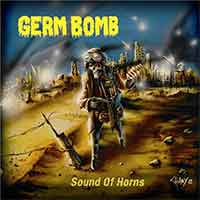