The self labelled grindcore duo known as Ghastly, are a formidable approach to the genre at hand. "XV" is fifteen tracks of a diverse fuelled whirlwind of creativity and uniqueness offering fresh air into old lungs.

Whilst the record barely surpasses a song every minute, it's concrete enough to establish the band into grindcore territories. The production is dingy at times, considering this is the peak of technology within music, yet this doesn't discount merit when the tracks are such short bursts of energetic, grinding oddities. There's a massive theme of torture within the song titles but also a boast of comedy amidst, whether it's deliberate or not.

Despite spending the majority of it's length claiming to blissfully soak in the realms of grind, there's a more simplistic design within that offers a credibility to their listeners. Probable due to the fact there's only two members of this band, each instrumental offering is obtrude and easily accessible to digest. The bass is often more noticeable than the actual guitar, offering a sense of groove and tone whilst the vocals are yelped, barfed and burped out by El Feto, who is also credited as the drummer.

Ghastly are perhaps a band who would have come with great success in the mid-2000's cyber-grind days of bands such as Preschool Tea Party Massacre, and who would of also suited the lineups with the likes of Cutting Pink With Knives or even 1000DEADRABBITS. Despite ever so slightly missing the mark on the realms of trendy core genres, Ghastly are able to squeeze themselves right in the middle of it all making them more accessible than ever to the metal community, and with the help of social media this should be possible now more than ever. 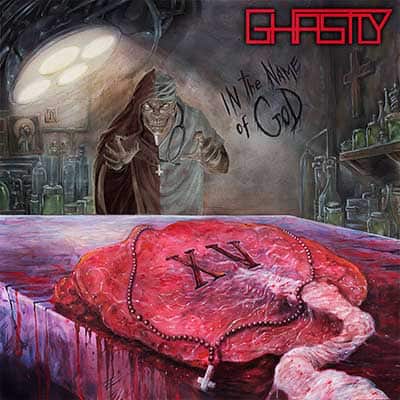