Don the corpsepaint and get ready to rock with Gjensferdel. This Norwegian duo formed in 2002 and have had some pretty good success lately. With their highly anticipated debut album out among the masses and already crushing earholes, their second album has been waited on for some time. Now, Varde is ready to be unleashed. Fans should expect the same black rock n' roll style that the earlier album had, but with much more groove to it.

Varde opens with "Vardoger," which is a brief prequel for what's to come. Don't be fooled as the soft melodies are not what most of the album is composed of.  "Illverk" is a much better example of what Gjensferdel is about. The guitars are lightning fast, but the drums aren't the usual assault and battery that extreme black metal leans towards. Instead, they hold a mid paced rhythm that adds a lot of groove, and a lot of times the guitars also add a lot of rock inspired riffs and hooks to the track so it is just as groovy as a band like Khold or Darkthrone. Throughout the album this whole black rock n' roll vibe is kept and the band tries to be as varied as possible in how they use the riffs. Sometimes on tracks like "Vesaldom" they have a bit of mid paced doom influence along the lines of the recent Marduk albums, and other times they are more heavily drum influenced like "Regin." But, for the most part, "Illverk" sets the stage for what Varde is all about. Aside from subtle melody changes, there really isn't much that can be said for variation between songs.

Does that mean Varde has the potential to be boring? While the style is the same throughout each song, Gjensferdel do their best not to create the same riffs or songs twice. Sure some may sound similar, but after matching tracks up together, each song is a littler different with each distorted chord. Fans of black metal will probably find this appealing for the intensity, but at the same time it is a clean intensity. The band don't try to shroud everything in distortion and instead opt to make each note sound as clean, as well as ugly, as possible. If fans are looking for more avant-garde work, then Varde may not be for them due to its monotony. However, black rock n' roll fans or people looking for metal with lots of groove and evil injected into it will find this album just fine in their earhole. 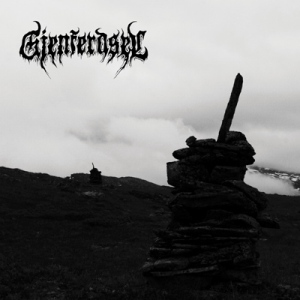