This is a full length album by one man Netherlands outfit Gnaw Their Tongues, this guy has produced a shit load of material, way too much for me to list here and has been going since 2005 in this form and is very prolific to say the least. This album was released in 2011 and he already has released a couple of splits and another full length since then!! Well what is it all about? This is black metal but a slightly different form than the usual, a bit more experimental to say the least and covers a few different genres, a bit of ambient, a bit of orchestral and much more besides!! Eight tracks at just under an hour is pretty decent value for money in my opinion but is it any good? Well I like black metal and I am partial to a bit of ambient black metal too but this is a whole different pile of rotting carcasses entirely!

Mories is the man behind this album and he does everything on it and he is certainly a very talented individual, this album has taken black metal to a whole different place altogether, it is extremely orchestral in the whole feel of it and has a very film score feel to it, I could certainly see this working with a real good horror movie. It is exceptionally well played and keeps the listener interested with its change of tempos and different instruments that are used, check out track two, ”Human Skin for the Messengers Robe” which has some real cool wailing vocals and is a real creepy feeling track. The whole album has this feel to it and as I have said takes the artist beyond black metal onto a whole new level, this is a totally new genre in my opinion and will not be for everyone but I do feel you should check it out as it is a masterpiece of playing.

I have no favourite tracks on this to be honest as I feel the whole package is the thing here, it is not an album to dip into and pick out a track or two, it is an album to put on while you are alone in a darkened room and let the sounds go around you and wash over you, I guarantee you will have be creeped out by the end of listening to it!! Not for everyone this but I would urge people to give it a listen with an open mind as this guy is pushing the boundaries of extreme metal here and going off in an entirely different direction, well recommended. 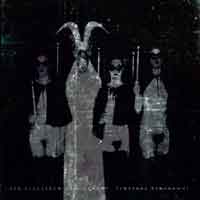