The Netherlands, the nation in which BRUTALISM itself is based and maintained, has spawned a true pagan band from its bowels. I say “pagan,” not because of tropes of Wicca or constant talk of runes and black nights, but because there is something pre-pagan and nonstandard and anti-even-the-light-of-known-European-pre-Christian-tribes-and-beliefs about Gnaw Their Tongues’ sound. I believe this is paganism in its most true form, a form which can not even be defined in bookish friendly and short sentence descriptions often used in polite and educated discourse. I think Gnaw Their Tongues represents the darkest meaning that is always around the bend and never arrives. They have released some of their work before REEKING PAINED AND SHUDDERING on the Web in free or PayPal donation versions. Paradigms Recordings has released their newest effort in a DVD box and I like that GTT has finally gotten a full release in the States.

Their work, especially on this album, is one of a kind in that it is noise ambient, noise proper, black metal, and dark atmospherics all wrapped into one. There are moments, for instance, in the second track, “Utter Futility Of Creation,” in which a layered vocal track of people talking abour curses and future generations, a dark demon voice is soft and eerie, a martial industrial beat marches is in one track and which all begins with a noisy slow black metal opening reminiscent of Ulver’s 1994 BERGTATT. The next track, “Nihilism; Tied Up And Burning,” features faster low-fi black metal, speedy and punk like Ildjarn, while a track of laughter emanates from the same pool of sound. Creative. Gnaw Their Tongues will not be labeled (I hope it is clear that even my attempts to stick definitions on this band has failed) because they work with dark music as a whole and this playground leaves them infinite opportunity to rearrange and destroy. 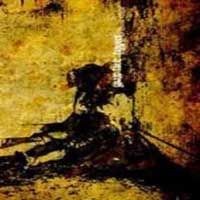 1. Blood Spills Out Of Everything I Touch
2. Utter Futility Of Creation
3. Nihilism; Tied Up And Burning
4. The Evening Wolves
5. Destroying Is Creating
6. Transition