Sarcofago are one of the most important names in extreme metal music history (“INRI” is, until this day, seen as a quintessential, when it comes to bestial black metal). They passed on, to others, the rules and guidelines of what is suppose to be the most extreme fringe of black metal, later on caught up by the likes of Blasphemy (are these the REALprogenitors of bestial black metal?) and Beherit.

You get the picture of what you will be facing, I guess!

A raw black metal core with complimentary amounts of violent death and thrash metal result in a beast that stands out as, possibly, the most extreme sub-genre of black metal. The animosity and discharge put into creating this violent and bloodthirsty animal, is immense! It pierces your eyes and dilacerates your ears… tremendously.

Goatkraft were formed in 2017, by three “nameless” instrumentalists from Norway. During that same year, a Demo (“War Metal - Promo 2017”) was released by Iron Bonehead. In 2018, the EP “Angel Slaughter” was shown to the world and, this year, 2019, “Sulphurous Northern Bestiality” was unveiled.

As an album, it holds, all the way through its 11 tracks (8 songs, 1 intro, 2 interludes), the same sense of direction: straight forward! There is not much variation, not much cadence changes, it is sort of a monochromatic album. But, as I said previously, it will sound especially good to those inclined to this expression of black metal.

I have never been a fan of bands like Blasphemy, Conqueror, Revenge, or even Black Witchery, but a band like Archgoat does it for me, mostly based on the fact that the sense of melody you can find in the latter is much more… melodic (do not mix melody with melodic, please. Archgoat are still a tank with fire in their eyes!).
In conclusion: not a very original band (but I believe that, in this sub-genre of black metal, originality is not a requirement…). The dissonance makes it hard, for me at least, to extract pleasure out of it, but, as I said before: there is an audience for this, and they will love it… 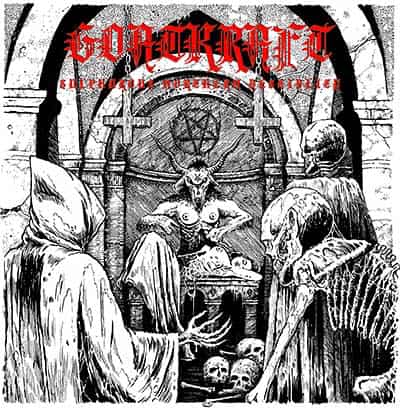