Goatwhore - Carving Out The Eyes Of God

After releasing their Metal Blade debut A Haunting Curse in 2006, New Orleans’ Goatwhore made a lasting impression on the stage at Sounds Of The Underground 2007 and Ozzfest 2008 besides touring with Celtic Frost, Venom, Suffocation, Fear Factory, Amon Amarth, Cattle Decapitation, Hatebreed and a host of others. Like their previous full length, Carving Out The Eyes Of God was recorded at Manna Studios with Erik Rutan of Hate Eternal. In the press release of this album, frontman Ben Falgoust made a point of staying away from the traditional hype of “this is our best album ever” while citing the intensive work band and producer channeled into the recording of this full length. Immediately afterward guitarist Sam Duet put across the “I don’t give a fuck what you think” mentality that has inspired bands to generate memorably extreme representations of their determination to conquer the world through their music. On this album you can hear the precision by which Goatwhore worked on the songs gracing it, right down to each single note and drumbeat. It won’t be long before you perceive the effort that went into the album. Think of the uncompromising black-thrash of the 90’s personified by bands like Witchery, with more of a “modern” feel to it and you have an idea of what’s in store for you here. 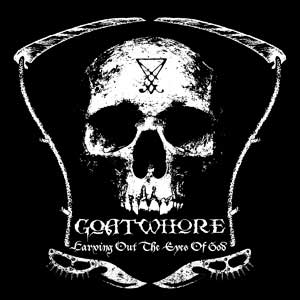 1. Apocalyptic Havoc
2. The All-Destroying
3. Carving Out The Eyes Of God
4. Shadow Of A Rising Knife
5. Provoking The Ritual Of Death
6. In Legions, I Am Wars Of Wrath
7. Reckoning Of The Soul Made Godless
8. This Passing Into The Power Of Demons
9. Razor Flesh Devoured
10. To Mourn And Forever Wander Through Forgotten Doorways