Having had the pleasure to indulge in God Destruction's latest album, “Novus Ordo Seclorum” and had my ears truly blessed by it, I thought I would delve deeper and see what other delights the band have produced and was sent this, so without further ado...

Lvzbel
With cold-hearted and relentless exploration it begins with sampled voices and haunting wails. The beats wade in, in a mutated aggression, the dark ambiance is like a cold finger with sharp nails drawing itself down the spine. The vocal terrain is still just as devoid of warmth and is steely and attention grabbing.

Non Human
Again beginning with sampled voices but this time the track broods a more urgent appeal. Its virulence is engaging and just as haunting so the blackness broods with a far reaching consequence and sinister guidance.

Become Death
The low grunts are from the depths of hell and bred to fiercely impress. The lustful responses are felt through an addictive rhythm given out by a sonic expression of keyboard, along with the vocals that doesn’t let up through its vengeful antagonistic pleasure.

In Nomine Dei Nostri Satanus
Let the blackness wash over the aural and it will, as it is a brawl induced encounter that sweeps feverishly with towering endurance. Caustic and malevolent it is a good detox for the mind filling it with the stench of death and madness that disguises itself as a melodic rampage.

Anticristo
Again more use of sampled angry voices cry out and then are over-run with a tempestuous flurry of keyboard. The seething and immense screeching vocal rips vehemently with an expressive anger and hatred, whilst the haunting keyboard drags it back into the light kicking and screaming.

Illuminatus
Is both dark and haunting in production. The strong unyielding rhythms are flanked with musical imagination that is drenched in formidable and distinctive energy. The throaty and devilish vocal is leering and mesmeric and not lost its appeal through-out the album so far and just gains strength through this dark predatory track.

Prometheus
Another sobering track that holds bite with venom. It bounces with rhythm however underlying are the familiar sounds of a haunting keyboard that lashes out at the aural and feeds ravenously upon it. Bordering on insane melodic hues and tempered precision it lacks nothing what so ever.

Imperor
Keyboard twiddling, samples a plenty and rambunctious rhythms enhance its structure with an irresistible bait that coaxes the ears into a black submission, helped along by an absorbing vocal tract that spews a contagious charm.

Armageddon
Is probably the heaviest and more metal provocation on the album so far, sending out a stirring apocalyptic smack to the senses as its strong slabs of ferocious rhythms whip up a frenzy amid a sampled voice shouting “Dirty rotten scumbag?” in a harsh and menacing tone. The underlying growling voices snarl with eager bitterness.

Son Of Satan
A rather disturbing beginning sounding like a record being played backwards amid unusual incidental noises and a pounding beat that is interrupted by a depraved vocal onslaught. It rips into the aural with a fevered exploit and is an ambitious track that grips and holds extreme excitement.

Across The Light
Is a slower track that harbours sinister malevolence that is until its choppy little synth notes become apparent and then it runs through a shrill malignant sound scape of astringent rhythms that are magnetic and coaxing amid superb melodic hues of electronic vibrancy?

“At the beginning of the album you have an idea of where this album is at but at the end of it you have no idea where you are at.  It twists the knife in several times and removes various parts of the human psyche like a mad surgeon!”

In Nomine Dei Nostri Satanus (Reaxion Guerrila Mix)
Brooding with sheer contempt for its victims, the possession of the soul is nearly over with a run of scaled madness it bounces with sheer force commanding energy from the living being to enhance the torment for the dead. Ravenous gnawing can be experienced and is pure devilry in the making.

Become Death – (touched by Stahlnebel & Black Selket)
Another disturbing encounter as the vocals whisper in a shrill ear crushing malevolence whilst the track uses up its feverish energy to spew forth vivid thunderous pounding beats and tempestuous rhythmic grandeur that manhandles the senses somewhat.

This album is engagingly destructive and corrosive and just as deadly as their second album. Creating a storm of death and pestilence its blackened roots of electro infused lust goes crazy and drenches the aural in feisty anarchistic flavours. At times the tracks prowl sneakily and other times they rampage without any provocation but just because they can. The vocal extremes are powerful and energetic dramatically warranting attention that they deserve.
At the beginning of the album you have an idea of where this album is at but at the end of it you have no idea where you are at.  It twists the knife in several times and removes various parts of the human psyche like a mad surgeon.
Its dramatic structures give rise for raised temperatures that ignite as soon as the play button is pressed with an ever quickening heart beat that follows. By the end of it you know who the masters are and will succumb and admit your defeat gracefully. The mental beatings and savage torture is prevalent through-out its thirteen track hate filled breath and therefore another solid enjoyable album from the amazingly consistent and deadly satanic assassins God Destruction. 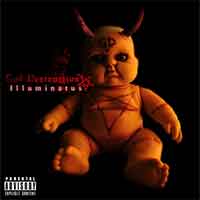