Godless Rising storm the ears of listeners with their third Satanic death-war metal opus, and it is even better than their first two. Created out of the ashes of ex-Vital Remains members, Godless aimed to create the best old school death metal that listeners had ever heard. They made a near achievement of that with their last album, 'Battle Lords,' which featured extreme drumming, plenty of melody, and hellish vocals to match the guitars. Many know of the original Vital Remains vocalist, Jeff Gruslin, as the sole survivor of the original line up. Since 'Battle Lords,' much of the band has desintegrated, but the group held together. Now, between two members and a few session helpers, it was left to these relatively unknown Rhode Island, USA metallers to make their mark back on the map. And they certainly did that with 'Trumpet Of Triumph.'

The first things fans will notice is that the music is much more raw and even slowed down a bit. The production almost seems like 'demo' quality, but also clear enough so there isn't enough fuzz to ruin all the instrumentation; everything can still be heard well. The vocals are as furious as ever and right in the front of the musical army while the guitars buzz along with the drums hammering about. "Where Is Your God" is a fine opener with chugging rhythms and blistering solos amongst the growls and roars. The drums are definitely a lot slower and more pulsating than in machine gun mode, but it gives Godless a more human feel again as opposed to things being too mechanical; on their last album the drums could very well have been machine handled. "Damnation Of Angellic Souls" is very unique to Godless because it features clean vocals in a pre-chorus, something that was never done before. They don't sound the best- it seems like a mix of male and female vocals together- but the guitars make up for it as they are heavily melodic and make this track one of the best on the album.

Another thing that 'Trumpet' does for Godless Rising fans is let the band explore their black metal side too. Tracks like "Christ Cadaver" really brings out the Satanic elements in the music with a chiming bell and Gruslin taking a more black metal shriek approach along with his growls. "Through The Flames Of Rage" and the title track lean more towards a black metal vocal style while the guitars and drums are more reminiscent of Gruslin's earlier Vital Remains days. Indeed, the two bands have gotten more similar over the last few years, except Godless Rising is much more raw and less polished to retain an older feel to the music, as much of the early 90s death metal was. Sadly, the only disappointment that can be found is with "Burn The Flock," which is a brief instrumental full of crackling flames and bleating goats and sheep. It would have worked great as an introduction, but since it is stuck in the middle of the album closer to the end it feels out of place and just a waste of play time. Godless probably would have done best to leave it out. Fortunately, the memory of this is wiped by "Warlords Of Darkness," which brings out the melody and aggression of the former 'Battle Lords' and made Godless such a fun band to enjoy in the first place.

In short, 'Trumpet Of Triumph' is Godless Rising's masterpiece. They started it up with their debut 'Rising Hatred' and finally got everything right this time. Even though some fans may argue that it is getting a bit too similar to Vital Remains, Godless still retains their own sound and style by adding a healthy dose of melody and slowing down their tempos a bit. It makes the music much more enjoyable and able to absorb rather than just sheer sonic hell. 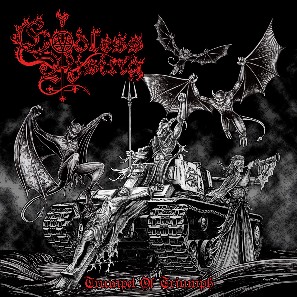