India’s Godless slay hard with their debut full length. Bringing a full assault of death metal to the ears, they sound like a thrashier version of Deicide with their groove laden riffs and deep barked vocals. Tracks like ‘Malevolent’ and ‘Post-Cryogenic’ feature Slayer inspired riffs with Glen Benton inspired vocals that merge very well together, creating a catchy sound that is polished enough so nothing is left out. Vocals, drums, and guitars all blend well together. While the riffs can be a little repetitive, Godless feature some very solid solos here and there to mix things up. The band tries to branch out a bit such as the more lulling interlude with ‘Descent,’ but overall their sound is very basic, but strong. Nothing new really brought to the table to really grab fans.

One track does stand out though and shows promise for Godless. ‘Cormorant’ features a bit of a darker riff style and more progressive tone compared to the chug/ thrash fest of the other tracks. The solos here are a bit more present and the pace varies- especially with the drums- making it feel less like a machine gun sound and more like solid drumming. Other tracks like ‘Replicant’ are more stop and go with the rhythms and sound solid and thunderous, and the vocals add a bit more death with a throaty scream vs. just the growls, so there is less monotony there.

Overall the music is solid death metal, so fans anywhere from Deicide to Morbid Angel to Cannibal Corpse will find the five piece Godless something very enjoyable. Hopefully on future works they will add even more progressive elements to make their work more distinguished to help separate their sound from their similar sounding compatriots. 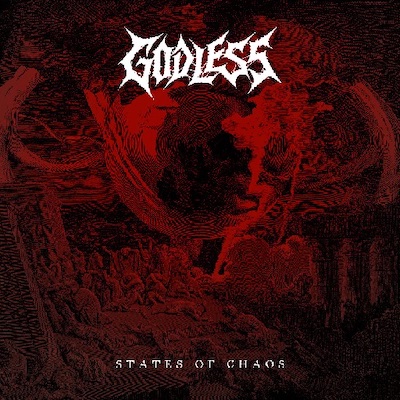