Gods Of Emptiness - Consumption Is Freedom?

Never heard of these Germans so it took me by surprise when I found out, they first started playing in 1995. “Consuption is freedom?” is their 2nd full-length album, not very productive you might say, but the thing is that after releasing their 1st album back in 1998, the guys split up. Well, they’re back now so let’s see what do we got.

Gods of Emptiness in general, can be described as a deathgrind metal band, but that’s not really the situation here because you keep listening to many hardcore, heavy metal or even punk parts on this release. The album begins nicely, with a true death metal hymn “religion is cancer” and so are the 4 next songs, but after that the music moves from brutal shit to punk/hardcore shit (the connection link are the vocals, remaining brutal during all tracks) and that’s a bit annoying I guess….they do not sound shity, but that kind of mix-up gives you the impression that the band doesn’t know where to go yet….Maybe it’s because they hadn’t played any music since 1998 and now is the chance to fuck all things up, I don’t know you guys check’em out and find out for yourselves. Truly, this band despite giving me a nice surprise in the beginning, left me with a bitter taste in the end. 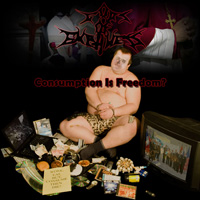