Just barely a year after their release of 'MXCII,' Black Metal outfit Gorath is back at it again, and have stepped up their game even more. Usually with barely a year between releases the music plays a dangerous game of being a hit or miss with the fans, but 'Apokalypsis' is a lucky stroke of genius. Amping more into the Progressive Black Metal vein alongside bands like Deathspell Omega, Gorath's fifth studio effort is their most introspective and unique yet. Opening with the epic "Before The Throne..." there is a burst of guitar along with guttural snarls and some excellent melodies before suddenly everything goes dead quiet for a bit, and then starts up again with just crashing waves after waves of chords. Yes, it all sounds very similar to Deathspell Omega, but Gorath are not as haphazardous or 'out of tune' at times, making them at least somewhat separate from the French legends so they don't come off as copycats. Later on things quiet down again for just simple single guitar pickings, adding heaps of melody and dynamic changes to the music just to let listeners know that the music is going to be far from anything ordinary or trendy. Heavier tracks like "The Seventh Seal" feature less melody, but still strong, catchy guitar rhythms as it goes between extreme and mid pace, producing a direct, clean sound that still sounds twisted and demonic.

Throughout 'Apokalypsis' the album tends to jump between fast, no-nonsense Black Metal and the more experimental kind. "Le Porteur..." features a simple, but churning rhythm right before it silences and just features the percussion of the drums and then the guitars come back in, though in a much more melodic and Folk Metal fashion as opposed to the raging tremolo pickings. "Beasts..." takes a hint from Funeral Mist and features a moment of almost complete silence with some very faded church choir recitations in the background before jumping back into the Black Metal. These sections may seem a bit random, but add a lot more strength to the music. Other tracks like "Wrath Of God" achieve a similar effect, but this track is far too noise ambient and quiet to really draw much attention save for a breather. "Whore Of Babylon" is a slow instrumental that just drags along in a lo-fi setting with some whispered vocals at the end; very creepy and the proper way that Gorath usually works on the progressive side of their music. Of course those looking for no nonsense whatsoever in their Black Metal and want no pauses of ambiance or melody at all will enjoy "Millenium" which is just blasting rhythms over and over through the track much along the lines of earlier Glorior Belli or even heavier Marduk.

Gorath have certainly outdone themselves here in what can be considered the 'new age of philisophical Black Metal.' While some tracks don't always contribute the proper atmosphere, overall one could say that they've certainly broken out of their shell of the more typical sound of their erlier works and moved on to bigger and better things. The production is a mix of buzzing lo-fi work and also crisp, clear thunderings when it comes to the drums and vocals, so audibility should be perfectly fine save for random moments of quietness. Definitely a strong and lucky effort for such a quick release, 'Apokalypsis' should appeal to Black Metal fans all across the board. 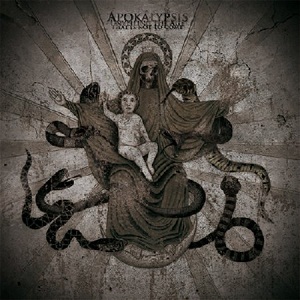