The debut EP from Grand Rapids based death metal group GoreThrone is a very fast ride, but “The Descension” is full of plenty of influences from Deicide, to Six Feet Under, to Cannibal Corpse that will make anyone who is a fan of death metal in general quite interested. There isn’t too much to go on here with the album clocking at about 17 minutes but the music hits hard all the same. Tracks like ‘Descension’ and ‘Alpha’ definitely have that Deicide speed and with the gritty discernable vocals that aren’t quite slam death guttural but just that right pitch without sounding over polished. The riffs are raw and thrashy with the click of the drums on full speed, but GoreThrone layer some melody in there as well so it just doesn’t feel like a chug fest all the way through. The later tracks on the album such as ‘Necropolis’ slow things down a bit for a doomier feel and ‘Celestial Noose’ has bit of a melodeath vibe that would appeal to Amon Amarth fans, so band doesn’t sound too one sided.

‘Acid Bath’ is probably the stand out track simply for the group’s use of spoken word sections. It is the one time they use this style and it helps make the album unique above being just another generic death metal album. The chuggy groove of the track is infectious and while a bit too reminiscent of Six Feet Under, the variation will keep listeners coming back to it over and over. Ultimately, GoreThrone has a lot of potential here with what they can do; the only downside really is the tracks are short so it feels like they are over before they begin. The impact feels a bit lost because if the group drew the songs out for even just another minute or so they might have more depth to the album. ‘The Descension’ grabs listeners and pulls them under straight to hell but it is a hell of a short death metal ride worth listening to, even just for one track. 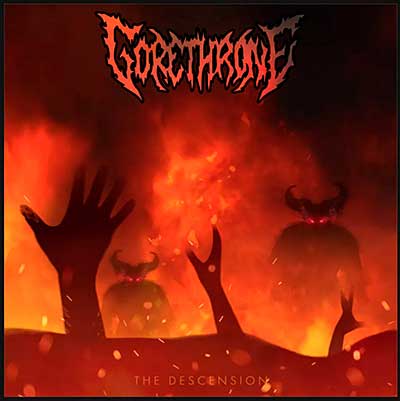