Haiduk is the death metal solo-project by guitarist Luka Milojica. Emerging from the cold forests of Canada, the project arose with the release of the raw, bone-chilling 8-song demo “Plague swept” (2010). Aggressive and dark, the sound of Haiduk is a direct channeling of haunting ideas from composer to listener, as the conceptualization, writing, and execution of the music is a solitary process. Free from outside influence, the songs pull the listener toward themes of power, evil, magic and myth. Forging ahead in solitude, Haiduk unleashed the full-length debut “spell-book” (2012); a black-magic conjuring of fast guitars and powerful riff attacks summoning an atmosphere of true darkness. Invoking spells of demonic strength, Haiduk raised forces from the infernal depths, sealing arcane knowledge and ancient power into the “Demonicon” (2015); a blackened tome of blasting distortion!

Syth
The darkness simply envelops as soon as you hit play on this tempestuous hellish journey. The drum beats are venomous and demonic as the sound changes direction from speaker to speaker. The vocals are low and gruff and simply engage with the familiar black riffage playing at high octane with nagging brutality.

Nazon
Just bursts into a seething array of darkly soaked agitation and drags you into their emotionally charged world of blackness. The atmospheric riffs are provocative and urgent and set a high precedence.

Deamris
Works on high powered riffs and exciting tones that soar into a void of madness as the track continues. The vocals are so low they sink into the melee adding a darker realm into the maelstrom.

Ayzr
Bumps and grinds its way into the audial cavities like a tic. The festering blackness is shadowed with typical riffs but none the less edgy and vehement. The vocal snarls are evil and suggestive in a way they compel and consume the senses.

Sarxas
Embroiled in a sultry fever this track agitates and demands attention as it attacks in a savage and unmerciful tenacity. Harboring an addictive rhythm it proudly strides across the audial with little regard for anything.

Corloch
Holds a much thicker content and texture as it boldly strikes with feverish riffs and never loses its animalistic vibes. It rampages with highly charged and challenging beats that coat the senses with a blinding evil.

Nergion
Exploits further its agitation to move at a high pace and smacks you over the head without you even knowing! Its creative journey is powered by bombastic riffs and again low toned growls that are strong and highly potent.

Vordus
Holds a twisting rhythm that burrows into the ears and then explodes with a ripe and ready malignance! As it grows in a smothering blackness it flirts proudly and grows ever more contagious in its flowing river of madness.

Xhadex
This track holds a sharp run of riffs that are so sharp you will cut your ears on them. The nagging and agitation is rife and superbly executed on this crazed adventure into a twisted mind of fragmentation. It is wild and will have the blood coursing through the veins.

Summary
Having not heard a lot of black metal for quite a while I can safely say it has been a refreshing experience to once again lavish and relish in its brutal tones. I feel like a born again Satanist ready to take on the hammerings of a dark and twisted mind as the music savages and ignites a certain passion inside me.

As with a lot of black metal bands members seem to be thin on the ground and usually are just one person executing the riffs as well as everything else, and one man Luka Milojica takes on everything you hear on this album which makes it all the more surprising and that bit more intriguing.

The Canadians are not known for their black metal but this album will put Haiduk firmly on the map. Hell! I may need an exorcism after this but the journey has been well worth it! 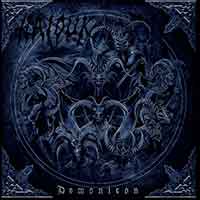