It started as a solo death metal project and it still is one, ofcourse I'm talking about Haiduk, founded in 2009 by guitarist Luka Milojica as a death/black metal project. Releasing his first demo "Plagueswept" in 2010 it kickt off in the Canadian metal scene in Calgary.

After 2 years of silence Haiduk's first album "Spellbook" was released and was a good and it was a mixture of powerful riffs and fast playing guitars. In 2015 the second album of "Demonicon" entered the metal scene with Luka still playing all the instruments and all the vocals in the band.

The band is often described as a mixture of death and thrash metal and has a kind of black metal feeling. Mixing these styles is difficult but not as awkward as it sounds, once you've managed it. The sound gives a raw but polished feeling, in Haiduks case you also get some darkness because of the guitar riffs combined with the drum parts.

Still a solo project until today Haiduk recorded their 3th album and "Exomancer" was releashed in 2018. Beginning with a slow and dragging song called 'Death Portent' the album kicks off, its very technical but also has a kind of astral feeling because of the guitar melodies. With the second song 'Unsommon' the guitar riff in the beginning is very melodic continuing throughout the song until it ends. Although the music on the album is of good quality and the atmosphere gives you a feeling like you are looking to the stars on a clear summer night. Sometimes it seems like the songs could use some more vocals, its not that Luka's grunting is awful or bad, it feels like some songs like 'Unsommon' just could use some more vocals.

When listening to the song 'Subverse' I got the feeling that it would fit perfect in a sci-fi horror movie because of the sinister melodies and the fast double bass parts. Another song that I liked was the song 'Crypternity' with a slow and threatening beginning followed by fast drumming and summoning vocals. And slow spiralling guitar parts in the middle of the song and the melodic ending.

The album gets 3,5 out of 5 stars. Because of the technical playing guitars and the good drumming. The fact that Luka plays all the instruments on the album is awesome, because it is not something that a lot of people can do. The downside of this album is that there are not a lot of vocals. When you're a lover of death, thrash and technical metal this is an album you should listen to. Because of the spinning and spiralling guitar riffs and the drum parts with fast double bass/blastbeats and the sometimes melodic parts. 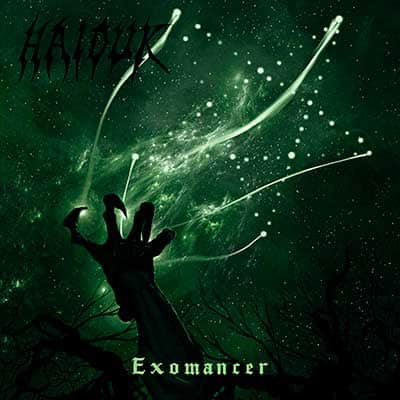