Canada oh sweet Canada. Here we go again with Canada. What can I say? Facts are facts and the facts have proven Canada as a quality breeder once again! So here we are, listening to a band from Canada once more. Actually Haiduk is a one man band, as Luka Milojica is behind every instrument on this release! I don't know what this guy is drinking but he really likes his shit fast. Mr Milojica is a true example of what we'd call a multi instrument! Everything on one, and it goes fast!

Haiduk's music is an amalgam of death metal fully influenced by the American thrash scene! A combination not so awkward as many death metal bands give out their thrash metal background more or less. The whole drill of the deal is to make those two, sound exactly meant one for another. I believe that this is Haiduk's field of expertise! In their case it is just that some times this thrash breaks, seem to overpower the death metal soul of this album! And of course there's no problem with that. It all goes!! The actual negative point in this one, is the vocal part. Luka Milojica has a great death metal voice but where is it?? The vocal lines on "Spellbook" are very limited! I really believe that a good voice combined to a smart vocal line can only add points to a release! On the other hand I don't like it when the vocals are treated as a mean to fill up a spot, especially in death metal, where a growl alone can turn the tables towards a good and a bad release. Apparently this opinion is not engulfed by Haiduk. Oh well, fair enough!

So what someone will listen to, when he tries Haiduk's "Spellbook", is excellently performed, technical death metal, with tight, solid drums, a bass guitar that follows when it should, where it should and as it should, great guitar riffs and performance, and I am going to stick in the guitars a bit cause my personal opinion is that the guitar part is this album's strong point! Great technical riffs, death metal based, with a thrash metal attitude and sometimes a black metal essence. Haiduk's riffing session is not individually great, but their combination, and their structure in a song makes the whole album level up instantly. And of course this whole matter goes even more up when we put to the table Milojica's great performance on all instruments, and mainly guitar! He is definitely one hell of a talented musician and maybe this is utopian, but I would love to see that material played live. It must be a real kick in the face. All good but the black spot of vocals for me still stands. Maybe it is just my personal fucking opinion on death metal. Technical or not I looooove to listen to the instrument called brutal voice, and I found a very little of that in this one. By the end I was left with the impression that I had heard no voice at all! Witch of course didn't happen at all, but the vocal lines are so limited. And in my opinion there's music enough here for vocals to blow people's brains out. Of course this black spot does not make it a less interesting release. It is just my personal opinion. "Spellbound" is definitely a very interesting release for 2012, from a one man, Canadian band, that as it appears, has a lot of potential in the extreme music! So clear your ears and give it a shot lads! 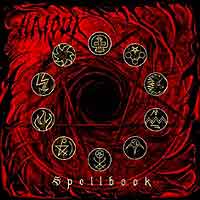