Hammer Horde - Under The Mighty Oath

Hammer Horde hails out from the USA (Ohio), prestenting pure Viking Metal which can only be termed as being melodicly violent in sound. Conceived in the winter season of 2007, the idea of Hammer Horde was brought forth by guitarist Derik Smith and drummer Jayson Cessna, after the departure of their previous band (Forever Lost). Originally intended to be a 2 man outfit Hammer Horde branched out and are now the 5 man creation as stands: Derik Smith guitars, Jayson Cessna drums, Ryan Mininger gutiars+keyboards, Ben McGeorge bass and Tom Sturniolo vocals.

"Under The Mighty Oath" is not an album to merely listen to but rather is more of something to experience. Each track is an insane quest each standing apart on it's own. The raging vocals rule this album and are nicely complimented with harmonizing backing vocal melodies. The slight, almost not there keyboards create a subtle atmosphere and the multi layered guitar work is just awesome, creating a very thick base giving ultimate strength and power to this album. "Under The Might Oath" is settled with amazing musicianship that can only come about from years of experience in playing together and this album can easly be compared to a good aged wine. It is very hard to believe that "Under The Mighty Oath" is Hammer Horde's debute and I am wondering it they will be able to top it with the next..
I have nothing but great things to say towards this album and it gets my rating of 4.5/5

Even if you say that you are sick of the over population of Viking Metal I think that you should still give Hammer Horde's "Under The Mighty Oath" a listen to, you might be pleasently surprized. 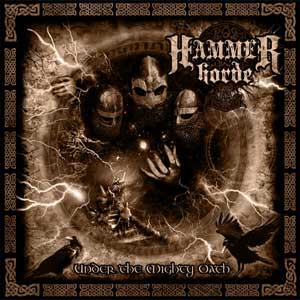 1. Storm Of Pagan Skies  2. Pierced By Odin's Spear  3. Under The Mighty Oath  4. In The Name Of The Winter's Wrath  5. Howl Of Himinbjorg  6. Farewell To The Fallen  7. Triumph Of Sword And Shield  8. Through Celestial Seascapes  9. Of Legends And Lore  10. Seafarer