'Vinlander' is the sophomore effort from Melodic Viking Metal based Hammer Horde. Trying to stay away from the more traditional 'deep vocal' copies of groups like Heidevolk, the band combines a sound based in Melodic Death/ Black Metal with raw vocals on top of cleaner ones that are a bit more operatic and Power Metal based than than the typical Viking Metal tavern beltings. The music still has that robust tone to it that could incite a few drunken brawls in a mosh pit such as on "Riders Of Annihilation."  Other tracks like "Vinlander" just have a great thumping rhythm to it that mix the harsh vocals with the clean ones during the chorus- which certainly sound more lively than a monotone droning yet less choral- although sometimes when performing they can tend to repeat the same lines over and over (moreso evident on "Hero's Heart"). Still, the musicianship and production is clear across all the tracks. On "Midgardian..." the band uses a very 'group' fashion on certain sections of the vocals to enhance the lyrical delivery of the song/story that is missing from other tracks like "Oathkeeper" that feel hollow without it, and the closing "Curse Of Andvari" has some of the better riffs- both direct, hard hitting ones and the more melodic faster ones- that build up an excellent Viking Metal atmosphere.

Hammer Hordes also throws in a few interludes to keep up variation and breathers in between the heavy tracks. "Hymn..." is an excellent solo electric guitar effort with thumping percussion in the background, making it sound almost like horns performing the music instead and definitely has that whole 'Norse spirit' about it, but at the same time it is far too brief and would have been much stronger had it been more epic like the other track. "Hoddimimir's Holt" is much more fleshed out but performed acoustically instead. Here the music is more organic and rich, and since it is a such a rare sound on the album will probably make it the most enjoyable tracks simply for its unique nature without feeling alien to the overall tone of the album. As a result, these two little additions help make the album and support the heavier pieces that will certainly be enjoyed by Melodic Death Metal fans and some Viking Metal fans who like to stray from a mainstream style but not go too far off the deep end that the end result is unrecognizable. For those who have followed Hammer Hordes since their debut, the sound hasn't changed much so everything is right about on par. 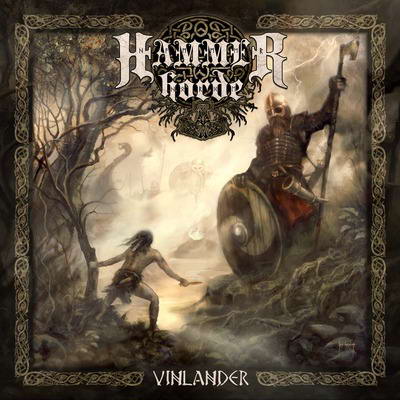