Hate Force One - Wave Of Destruction

Death thrash from Germany is normally a good starting point but I did wonder about this release from initial sight of the Hate Force One logo as the old band logo was off putting because it looks like a typical deathcore logo, the new album represents a slight change and refinement of this that gives a slightly difference positive impression. ‘Wave of Destruction’ is full of death growls and heavy thrash invoking marginal melodic black metal in places, especially in ‘Sick Philosophy’. A track like ‘The Joker’ rears its thrash head with a muscular rhythm and death vocal to boot simplifying the trait of power and aggression.

The release continues throughout with a “comfortable” sense of passion, clearly audible as it is, I do wonder about my own complacency as this is a very popular style and genre. Still, I cannot knock Hate Force One’s delivery as it is very strong and very tight.

All in all, this is a solid hybrid of genres, typical for its classification but for me lacks a little of a jewel factor, something to make it stand out from the crowd, but overall ‘Wave of Destruction’ is thankfully delivered with a solid foundation buried in its cross genre roots. 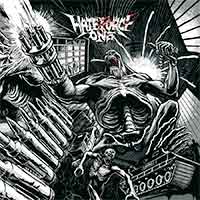