US death metallers Head Not Found emerge onto the scene with an independently released CD. Post Suicide Regret is filled with images of drunkenness, drug addiction, psychosis, demonology and murder, set to a primal soundtrack. Being that Head Not Found are from Alabama, in the middle of America’s conservatively fundamentalist Bible Belt, I’m certain it comes as no surprise to anyone reading this that they would follow this train of lyrical thought while composing the songs here. Post Suicide Regret shatters the pleasant façade of the band’s environment not long after it begins, reflecting all of the behavior that is commonly expected of headbangers in the land down south. Musically it packs depth and crunch as traditional death metal does, with some parts that hint at having emerged from late 80s death metal and mid 90s black metal mind sets. There’s also a sample borrowed from Exorcist III: Legion featuring the immortal talent of Brad Dourif as James Venamun the Gemini Killer. 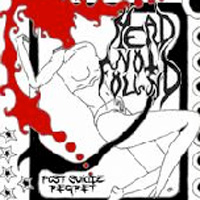