Sweden´s Hearse was formed back in 2001 and since then they released a demo, two EP´s and (incl. “Single Ticket To Paradisse”) five full length albums. A very productive band indeed. The members are also fairly known within the Death Metal scene and already played in such acts as Arch Enemy, legendary Carnage or Furbowl. Hearse´s style is a cool mixture of melodic Death Metal and straightforward Death n Roll with a nice touch of a fucked up attitude. The songs vary in tempo and instrumental work, while the hoarse vocals are growling stuff about our society, inner struggles, life and (of course) death. The production is clear, but with a little trace of filth, which is a fine contribution to every song of this CD :) Altogether “Single Ticket To Paradise” is a pretty cool full length release with interesting tracks and a nice cover artwork. Feel free to give Hearse a try if you think the description of their music may fit your musical taste. 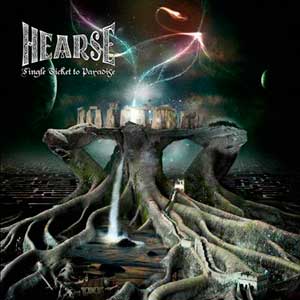